Back when I was a lowly college sophomore, my dormmates and I had an innocent courtyard grill-out. The evidence, beautifully captured by Facebook photo auteur Tad. Each of us who partook were tagged with our respective offerings. Mine, a veggie skewer a.k.a. a Dana-kebab. 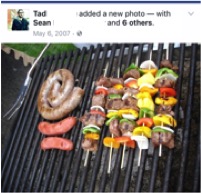 Faster than we could drop my skewer through the grill bars (why didn’t we grill perpendicular?!), this photo thread got out of control. Since this fateful day – May 6, 2007 – The Meat Photo has continually haunted my Facebook notifications and newsfeed.

On its first couple days online, somehow (hypothesis: I think it was finals week), we went bananas on the comments. In the ensuing weeks literally hundreds of comments were added. Mostly uncouth euphemisms that I won’t repeat here.

I should put this in perspective. Today, getting hundreds of interactions on something you post isn’t uncommon. But this totally wasn’t the norm at the time. To illustrate, let me tell you what Facebook was like in May 2007:

…OK, let me level with you. I pretend to be irritated by this photo. But the truth is, I love it the most. Because to this day, every few months, someone re-ups the thread; which unleashes a flurry of comments from all involved; then it goes dormant for another six months until the cycle repeats. This has gone on for nearly a decade. This photo is practically folklore.

The most recent comment storm called out some ground-shaking information. As the commenter pointed out, this week is the ten year anniversary of this stupid facebook post!!!! And there’s even talk of a reunion, bringing together people from Nebraska to California to both Washingtons. You guys. This would rule.

So, in honor of this momentous occasion, I bring to you: a too-deep deep dive into the ridiculousness that is The Meat Photo.

This data raises important questions. First, we need to talk about why nobody posts at 2:00 p.m, even though presumably we’re all awake; are you all hanging out without me? Second, did George Clinton really comment on this thread in October 2012?

And most importantly…can we hit 1,000 posts before this pic’s tenth birthday? Whoever posts the 1,000th post, you’re getting an entire pitcher of Elk Creek Water, DataDana’s treat.